Back to all posts

Avail your eyes towards the water!! Is that a seal with candystripe suit?! The Great Walrus rumoured to dress up as Waldo?! NO Beachgowers! Feast your eyes on AP's own JCo swimming as one with the flow.  His skin a healthy brown. His movements strong and slow. His voice bearing positive tidings!
Animal Parts are set to release the first of two EPs, entitled Other Rooms, written while visiting numerous domiciles across the beautiful countries of America. Marking the group's first acoustic guitar driven release, JCo is taking back to the familiar road, bringing new songs, vinyl albums, and promoting his newly pigmented skin.
A Limited Edition Vinyl release, Others Rooms is set to be unleashed digitally Tuesday August 20th, with a bang-smack party/performance planned at the Common in Toronto.
The second EP is set to be released in the fall of 2013, promising to prepare you for the coming of winter, is entitled "Six Arms To Hold You".
Be free. Eat Well. and love yourself as Animal Parts loves you. 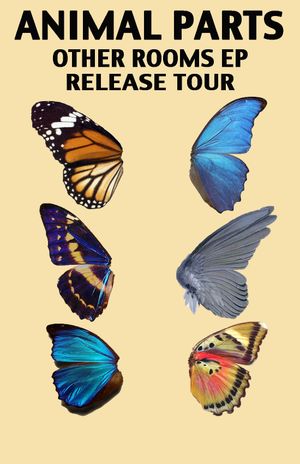 
*If you would like to attend this house concert email booking@animalpartsmusic.com